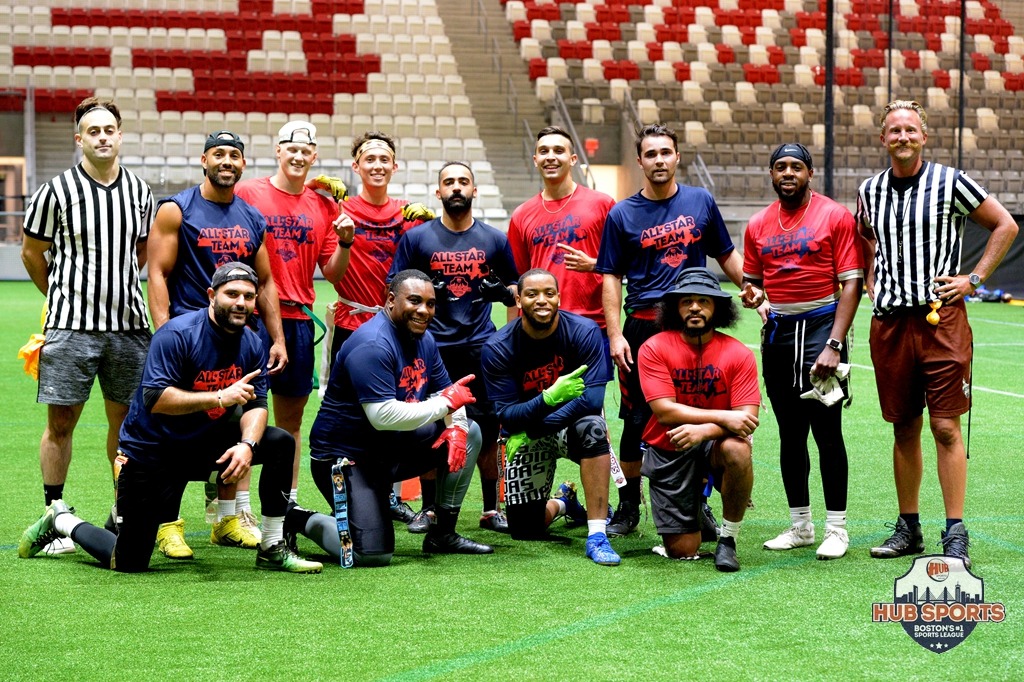 What can be said about this squad that hasn’t already been said? They finished off the regular season last week with a perfect unblemished record. With Art leading the squad at QB the receiving core has not gone hungry this season. They finished with a +102 point differential and are averaging 37.3 points a game, woah. Can they be beat? Oh yes they sure can but they’re #1 for a reason, everyone is gunning for this team.

Will has really taken these guys from worst to almost first. The boys have played 4 straight seasons with us and they finally have everything working in a fluid motion. These guys are an athletic group of unsuspecting flag footballers. They’re fast, feisty and have the stamina to stay with any team in the league. They were tied 18 up at the half with The Family but ended up losing by 14 in the end. Possible championship rematch?

Here’s another squad that has a lot of familiarity with HUB flag football. They’ve been playing with us since last summer in Brighton and have steadily improved their offensive and defensive attacks in the meantime. They’re an inconspicuous group, but they have more organization going on than most teams dream of. Pretty sure they keep their own individual stats? Kale doesn’t air out the long ball too often so it’s short dunk and dive plays that can propel these guys to the semis and beyond.

The boys from BMF are a gritty crew that love their football. These guys show up to play every day of the week but last week was rough for them against The Family without their starting QB. They will need everyone there in full force to be able to advance to the championship. We’ll be surprised but not shocked if they don’t advance to the semis, this field is stacked.

Every time these guys take the field it’s like Friday night lights all over again. They come ready to ball. Not just ready to run a few routes and work up a sweat, they come to win. After playing in the Braintree league with us earlier this year, they catapulted into the rough n tough Weeknights in Southie Division. They’ll be wrapping up their season tonight with a must win game vs the Dolphins at 8 PM. They win, they’re in. Lose and it’ll  come down to a tiebreaker to advance to the playoffs.

Here’s a crew that has been playing with us for a good 3-4 years. They come and they go, mostly go when they want some easier competition in another league (so we’ve been told). This is a quality group of guys that have a lot of laughs on the field but never get out of line. They have a good scheme together but can they hold off some of the big boys in the division? Time will tell, they have a must win game tonight as well. Win and in, lose and it comes down to a tiebreaker.

This team is a new addition to the league this season. They have definitely held their own for a new squad. They have some quality athletes on the team but they’re still honing in on the full package on the field. They certainly have the skill that’s needed to advance but they lack the experience. They should win their final regular season game tonight and that will lock them into the playoffs starting on Tuesday.

Boy did these guys cut it close on making the playoffs this season. At 3-3 for the season they are almost a lock for the playoffs. They just have to hope for a lot of points to be scored tonight so they win a tiebreaker on the points against tiebreaker. If they are destined for the playoffs then we know they have what it takes to make a major run at the championship. This core group of guys has been playing with us for a good 4+ years now so there’s no question they have the experience. They need to limit the long plays and focus the whole game to come out victorious in this buzz-saw of a league.

An honorable mention at most right now. Fresh off of a league championship title in the summer, these guys are sputtering at the moment. They’ve lost a good deal of their roster to the college season. Crazy that these guys would choose college football over adult rec flag football, right? Obie and the squad must win tonight and they basically have to skunk their opponent (Toe Drag Swag) to advance this season. There is no doubt these guys have skill but do they have what it takes to make a run in the playoffs? We shall see on the field tonight.

CHECK OUT THE 2002 FALL SEASON