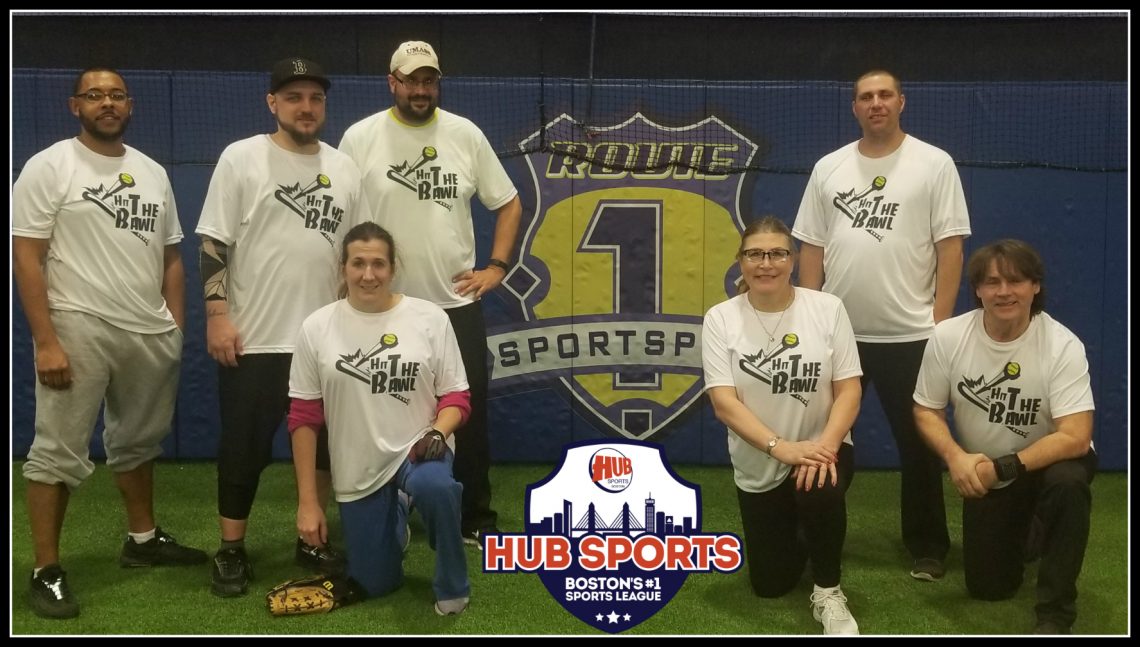 For our Team Spotlight this week we focus on one of our most dedicated softball players year-round, known as none other than Kris Monson. Currently his team, Hit The Bawl, is playing in the Thursday Night Arena Softball League. He’s one of those guys that hears the word softball and can’t help but get excited. Kris doesn’t take the game too seriously. He loves to have one and has quickly established softball as a way of life for himself. The guy is the ultimate team player, making sure everyone stays involved. You’ll see this exemplified below in his own words as Kris gives us a more in depth breakdown of his indoor softball team:

“Hit The Bawl started as a group of people that all knew the captain, Kris Monson. Kris has been in a bunch of Hub Sports leagues over the past few years. We like to have fun but don’t take things too seriously.

There are two pairs that are related. Stacey and Tori are married and are true ballers that can never get away from the game even as ASA/USA umpires they can never stop playing. Josh and Karsten are brothers.

Kris says, I love this game, so glad I found it. I play so much because I wanna get good fast, being in my mid 30s, I never played before 2015, I’m not getting any younger. Need to be good enough to play the way I want and know I’m capable of. Can’t play at a high level without at least some skill. More games equal more experience. When I can’t play anymore I’ll definitely be an umpire.

As for this team, I have put together a great group of people personality wise that are decent ball players. It’s always a good thing to be on a team with good people. A good aura on the bench and a bit of skill, makes for a good team on the field

Scott is our jersey sponsor & helped coin the term “Hit The Bawl”.

Scott says, I have become a Hub Sports fanatic, following in the steps of Kris Monson.  Hub Sports is a great organization, it is awesome playing at all the different venues,  it is great to continue to play on new teams with the same teammates.

Stacey says, I wouldn’t have joined without my whole team again. I really like everyone on my team. Scott makes me laugh…

Tori says, I’ve played in the HUB for many years during all seasons! I love softball at all levels and have played mostly in B and A division coed but umpired them as well. Indoor softball is a very different level of play which is fast paced and requires well placed hitting with quick hands for fielding. The team has what it takes to win and I like that we have fun doing it. Already looking forward to next season too! She then says, How’s that? Too much?

Karsten says, I like everyone except our 1st baseman. He stinks (Josh). (They’re Brothers)

I told them to stop going to the bar before our games, ya both need showers. Haha jk

Josh says, It feels great to get back out there and play ball.  I played as a kid and it’s great that hub sports makes it possible to keep playing the game I love.

Hitting the gap with 2 people on priceless

Shine is as much a softball fanatic as Kris. Shine is known as the White T-shirt Bandit, The only way we can get him to wear a team Jersey is to have white jersey.

We look forward to playing many more seasons together!!”

You too can hop on the field for the 2nd session of indoor softball which begins at the end of the month, click for details – https://goo.gl/syYrtx