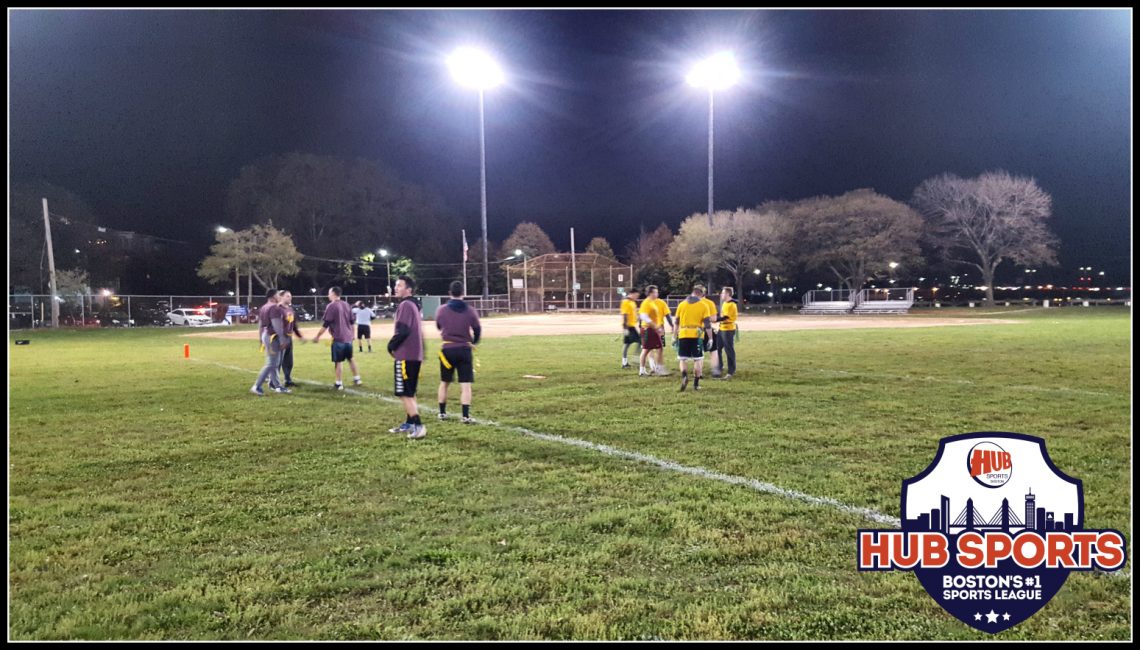 For the first week of indoor sports we are featuring a team that will be lacing up for their 3rd season with us this year on the gridiron – Dawgedness. The squad is led by team captain Tyler Nordbeck and most of the team hails from the Norton, MA area. They’ll only have to drive a few exists north on 95 to gear up for battle every Tuesday in the brand new Tuesdays in Norwood Flag Football League. As mentioned before this will be their third flag league with us in 2017 and the improvement has been quite noticeable. They started out in the Wednesdays in Southie League at Evans Field in South Boston back in mid June. It took them a few games to mesh as a unit but once they were comfortable on the field they could let their natural abilities take over. Word on the street is Tyler played safety in college and he does a great job of leading not only the D but the offense as well. Dawgedness were able to pull off an upset and advance from the quarters to the semis in the Southie league before being knocked out. They bounced back in the next season of the same league playing at McConnel Park in Savin Hill. The competition was fierce in this league and after a shaky start to their regular season they were able to pull it to together and finish as the 8th seed for the playoffs. Two of their regular season defeats came by 1 point in the last seconds so they very easily could have been a 6 seed or better. Heading into the playoffs on November 8th they had a tall talk in front of them, the #1 Rebels team that beat them 53-12 in late September. This quarterfinals matchup was a game for the ages, back and forth, Dawgedness led 14-8 at halftime. With about 3 minutes left and the score tied 14-14 they were able to convert on a 4th and goal play for a TD caught by the afore mentioned Tyler Nordbeck to now lead 20-14. This sent the Rebels into panic mode. The Rebels’ captain and QB Carl Plaut was able to drive his team down the field with a couple big hitters and convert a TD with less than 1 minute of game time coming off the clock. It was time to see if Dawgedness had any bark left in their bite. After converting a couple short check down passes they were rushed into throwing a pick six which proved to be enough for the Rebels to hold on and win the game 26-20. Now that these guys are back for their third straight season they have to be feeling confident they can beat most anyone on grass. The tides change a bit as we head indoors now on turf at Compete Indoor Sports in Norwood but we’re confident they’ll be just fine. Good luck to the Dawgedness squad this season!

Surely some of you are reading this right now and asking yourself, “why can’t my team beat these guys?” Well, you still have a chance to face them as we can accept ONE MORE team into the league. If you have the itch to lace it up indoors like so many others do just click the link below: