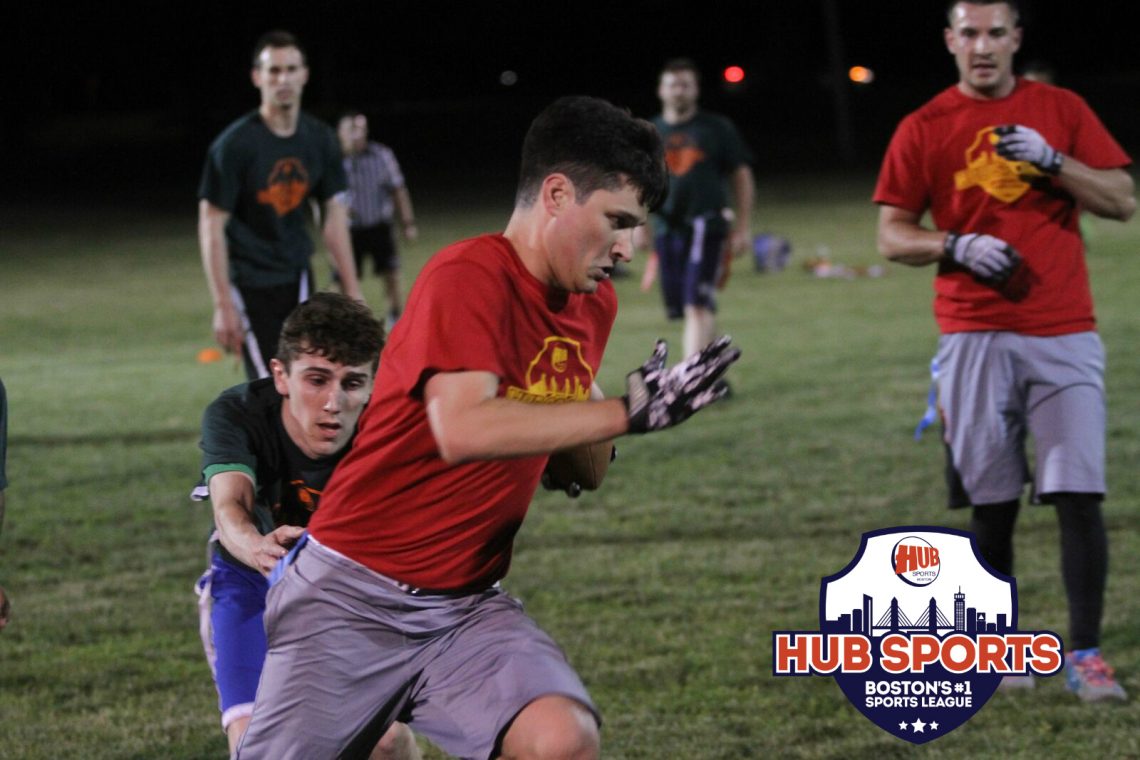 As we head into the final two weeks of play in the Tuesdays at Compete Indoor Flag Football League things are really heating up. We’re way past those first week jitters, no more opportunities to claim you’re just knocking the rust off. It’s time to put your money where your mouth is, time to live up to the smack talking. This is the first inaugural season at Compete Indoor Sports in Norwood and boy has it been a doozy. The games are close, the teams are evenly matched, and the saying of “it’s anyone’s game” couldn’t be truer here. The top four teams in the league will advance to the single elimination playoffs on 1/23 but before they do we’re ranking them top to bottom not based on the current standings.

This squad has been comprised of all individual players that signed up independently – AKA an indy squad. Indy teams are always a tossup. You might be messing some of the best athletes together on the field but if there is no organization or leadership present you might be in for a long season. The Knights proudly are an example of an indy team that has their stuff together. With a solid QB slanging the ball to some speedy athletic receivers the game just turns into some pitch and catch for them at times. Their only blemish on the season came in week one when the suffered a 22-20 loss to the team we’ve got slotted at #2. They have a +45 point differential but will have to take care of business on Tuesday if they want a #1 seed for the playoffs.

Sitting in a very close second place right now is the 4th and Shlong team. They’re currently listed in first place in the league standings but after suffering a bad loss a couple weeks back we’ve bumped them down to second. In order to regain supremacy they will have to defeat their toughest competition yet in the Norwood Knights team. This will be a rematch of when these two squads met in week 1. This young feisty group of guys have a lot of moxie but moxie never earned anyone a W. They will have to put the style points aside and get down to the real nitty gritty style of football in order to solidify themselves as top dogs heading into the playoffs.

Ahad and his team have quickly emerged as a top viable contender to take the title this season. They joined the league a week late so their one game behind in the standings but they’ll catch up over the next two weeks. The QB is the glue that holds this team together. He’s poised in the pocket, makes safe throws, slings a tight spiral with accuracy as well. Does it help that the whole team has a wristband with an extensive play sheet on it? YUP! They’ll burn the whole play clock down which in turns make it a shorter game. They cross all the T’s and dot the I’s, they’re just plain organized. In four games they’ve scored 103 points and currently have a +16 point differential. This team is certainly on the up and up.

These boys entered their 3rd season of flag with us in 2017. They have had some big high points but have recently slipped into a downward trend. The roster was stacked to start the season, it seemed like Tyler held tryouts for this season because it was clear he wasn’t messing around. It’s a win at all costs type of attitude from Tyler that kicks off right at the coin flip every season. OK if he defers the choice to the 2nd half, please don’t say “we’ll play D to start”…I digress. Between a broken wrist, a few sprained ankles and some other bumps and bruises his guys have been dropping like flies. No this isn’t tackle football but these boys play hard. They lost their second game in a row last night to drop them to 2-3 on the regular season. They know they’re good enough to be top 4 to make the playoffs but they’re currently sitting in 5th. It’s win or go home next Tuesday as the regular season wraps up.

This crew got out of the gate strong, getting off to a 2-1 start. They have since dropped their last two games to land right on the verge of being bounced from the playoffs. Their final regular season game will determine weather these guys advance or go home. The organization and leadership on this team is very strong. Tons of positive reinforcement is constantly being pumped out from the blue squad. They’ve currently given up 114 points and have a -8 point differential. Do they need an offensive overhaul? Absolutely not. If a few more breaks go their way they’re right there, right in the thick of it for a championship hunt.

Last but not least is the OG Champs squad led by Nate Cohen. These guys also started a week late so they’re a week behind, not to worry they will catch up over the next two weeks. Their record currently shows no wins, however they’re not far from their first victory. So, in other words we aren’t talking about a Cleveland Browns type caliber team here. These guys aren’t tanking for a #1 draft pick, they’re just getting off to a slow start. After last night’s game it’s clear they’re finally feeling confident out there. They narrowly missed upsetting the top dog Norwood Knights team, losing 33-25. There’s no doubt it’s a win or go home situation over the next two weeks for this squad. Given the opportunity to shine these guys could be dangerous if you sleep on them.

Next season of Tuesdays at Compete Flag Football kicks off 1/30! Click the link for details – https://goo.gl/hbr2A3