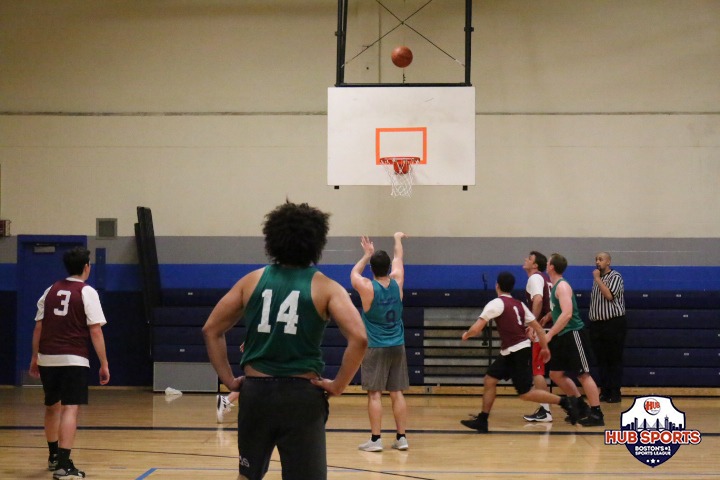 Tonight marks the final week of regular season games in the Wednesdays in Waltham Basketball League. It’s been an exciting season so far but there’s still a lot of basketball to be played before it’s all said and done. Two of the six teams in the league have wrapped up their regular season and have a bye week tonight. However, the other four teams taking the floor tonight are looking to make an impact on the standings and solidify their spot for the playoffs. The top four teams in the league will make the playoffs and all teams remain alive for playoff contention tonight. It’s anyone’s game, who wants it more?

The boys from Burlington sit on top of the league standings after finishing their regular season last Wednesday. They were boasting an undefeated record until a major slip up against the Diversity University team. It wasn’t just a loss, it was a 19 point beat down. Such play seems to be very uncharacteristic for this squad. Prior to last week their only “blemish” was a double overtime tie game against The Dirty Dogs. If they hope to take home the title next week they will have to play solid defense and spot the easy fast break buckets.

Bilal and his squad have had a very solid season. They’ve split the season series with the #1 seed and are currently coming off a big time win against them. What puts them at the #2 seed then? They have not stayed consistent throughout the season. Aside from the loss against the Burlington Boys to start the season they also suffered a set back to the Clozers team, giving them 2 losses on the season. Their offensive fire power can really set them apart though. They’re boasting a +53 point differential and have consistently scored over 60 points a game. If they play tighter D they should be clicking on all cylinders.

This is probably our most “seasoned” team in the league. Hey but age means experience, right? Many of these guys were born in the 70’s and that means they first and foremost they aren’t millennials. They remember the days of no cell phones fondly. They may be a little older than the rest of the field but there’s no doubt that these guys can ball. They will play their final regular season game tonight and hope to lock up the 3 seed. Their only defeats on the season have come by a total of 2 and 4 points. Hit a couple more free throws or take away a couple turnovers and these guys could be sitting undefeated. They will have to play at very high efficiency to take home the title next week.

These guys were a late addition to the league and therefore have had a condensed regular season schedule. They were only able to go 1-3 in the back to back double header weeks that they played. Last week in just a single game they were able to pull out a very close two-point victory over the tough Clozers team. They will play their final regular season game tonight and needless to say they are desperate for a win. In order to stay in the top four for the playoffs they will need to take care of business tonight to lock up the final spot for playoffs.

Do not let this team’s record fool you. If they can win tonight, they’ll be vaulted into the playoffs where they very well could pull off some big upsets and take the title. This is the squad that tied, yes tied, the #1 Burlington Boys squad. They can hang with the best of em’ as their biggest defeat has come by only nine points. Their point differential is sitting at -8 which further backs up the fact that they can hang with anyone in the league. What will be the difference when it comes down to it? Good defense leads to good offense, if they can perfect the D you’ll have to watch out for these guys.

Here’s another example of a team that you can’t take lightly based on their record. It’s a quick regular season and as we know in basketball, a few mistakes can cost you a whole game. A quick 10 point run can bury a team before they even know what hit them. They had a very rough entry to the league, losing 83-50 to Diversity University. Since then they have hung with every team in the league, losing at most by 9. If they’re able to pull out the victory tonight they will also solidify their playoff spot. Teams 4-6 right now are all up in the air on whether they’re making the playoffs or not. They’ll be playing the #4 seed that they already beat earlier in the regular season, should be an entertaining night of basketball!